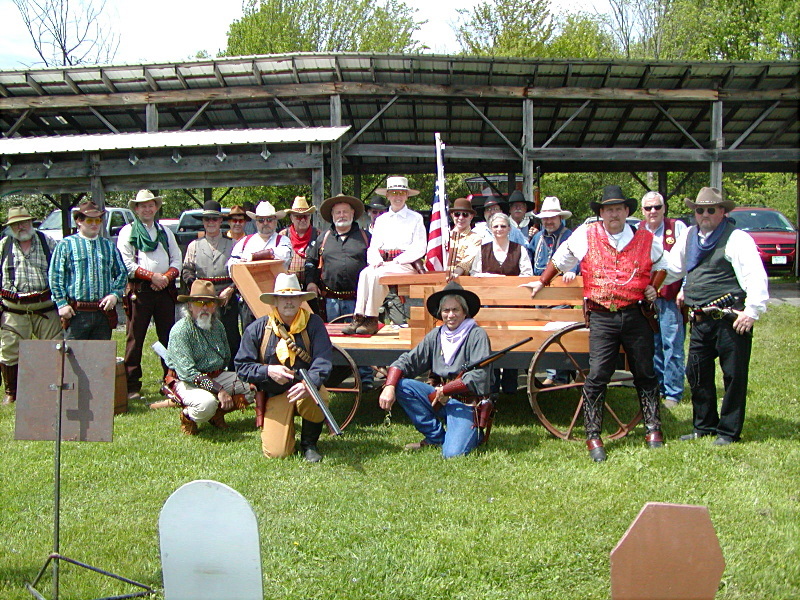 Shooting in the style of the Old West has developed into a sport with more than 100,000 members of S.A.S.S. (the Single Action Shooting Society). Here is your opportunity to relive your childhood playing “Cowboys and Indians” in this sport, and include the entire family. Cowboy Action Shooting helps 21st century people live out and relate to the American west in the 1800s, since actual events from history may dictate the course-of-fire.

One of our shooters once told us, “I got into this style of shooting because just watching wasn’t so interesting after a while. I don’t ever practice, and I really don’t worry too much about how I do in the competition. What I really enjoy are the people and the diversity amongst the shooters. I really look forward to seeing everyone at the matches and catching up. The sport, over all, has given me confidence around firearms and how to handle them safely, and have fun!”

Equipment and other things you’ll need

While a great deal of equipment and gear can be acquired by serious cowboy action shooters, you will need four things to fully immerse yourself in this sport: Guns and leather, an alias (shooting persona), a costume and “spirit of the game.”

WE HIGHLY RECOMMEND that every new shooter come to a match before purchasing any guns or clothing. We will get you involved. You can ask questions plus try our guns and ammo and find what is best for you.

As the name implies, Cowboy Action shooting uses guns in which the Cowboy or Cowgirl are part of the action, either by working the rifle’s lever-action or by cocking the single-action revolver. Cowboy Action includes three firearms: A rifle, either lever action in pistol caliber or a pump (Lightning); a shotgun, either side-by-side (hammered or hammerless), pump action 1897, or lever action 1887; and two single-action “six-shooters.” Replicas are accepted and are usually much more affordable. You will need a leather gun belt, two safe leather holsters and a shotgun belt.

For some, this sport is all about the fashion. You can dress up with as much or as little as you want. The bare minimum is a hat, jeans, and boots (cowboy or lacers). Things like ball caps, t-shirts, wrist watches and sneakers are frowned upon.

No one ever uses their real name. A shooter will pick an alias based on the character or persona they are portraying. A family may choose to be part of a “gang” with some part of their name in common, while others pick an ancestor, name that relates to their profession, favorite firearm, notable trait (Shady Rose), something funny (Dunn Shotwell), or a movie character.

Spirit of the Game

As an adjunct to good sportsmanship and second only to firearms safety, “the spirit of the game” means you do not look for ways to create an advantage out of what is or is not stated in the rules. There is also a helpfulness mindset. Everyone helps reset targets and police brass. This is sometimes called “The cowboy way”.

How do I get started?

We shoot the fourth Sunday of each month March through October (weather permitting) except August when we shoot the third Sunday.  Set-up starts about 8am, safety meeting at 9:15 and shooting starts after that. Fee to shoot 5 scenarios is $10, first time shooters are free.

If you have any questions you can contact Tim Mullen at 315-788-1168.  If you do Facebook we have a site called “Sackets Harbor Vigilantes”.  Give us a like, then take a look at photos and video of us shooting.